First of all, we want to get comfortable and then close our eyes are start taking deep breaths.

Turn the attention to the toes, while continuing to breath, and move up the body turning everything to jello and relaxed.

Next, push roots unto the ground in 5′ increments until we move the red energy to 33′.

Now we pull golden yellow from the Earth into our legs, and torso and whole body in 1′ increments.

Let yourself experience neutrality, and let go of all resistance. We want to be pure channels so the messaage is not distorted.

Top third of the page, draw a perfect circle.

Then draw a dot in the center.

Now draw a spiral from the center counter-clockwise out to the edge 3 times.

Now write the letter R, S..then spiral next to it. Keep going until you receive something like an image or a word, etc. This is intuition not thought.

10. Visualize 10 as complete white number on a black background. Roman numeral, whatever you want it to be.White light starts at 12, 9, 6, 3. Faster until its like a comet, then let everything become white light.

9. Visualize a box on your lap, any shape or color. It’s like a vaccuum that takes everything physical into non-physical. Everything around me is sucked in, in 10′ increments and the only thing left is me, the chair and the box. The house, the neighborhood, the county, the state, the Earth, the moon, the Sun, all the planets, the galaxies, etc.

We are actually our own discreet parallel universe. We can thus determine what it is we prefer regardless of what seems to be happening in physical reality. We are all-powerful, meaning since we are in our own discreet parallel universe, when any of us change our minds, we are actually shifting to another parallel reality, that is more reflective of the change we made. We will never actually change the Earth we are on right now or anyone on it. As we shift our vibration, we will move to a parallel reality that is actually to an Earth and population of people that we prefer, but this version of Earth will still be here.

So the way we change the outer, is to change the inner. When we change our minds, we literally and physically, change our world. These parallel realities are all going on simultaneously, and there are an infinite number of them. So our job is to choose the Earth we prefer, and that is what we will experience outwardly, in the illusion of so-called change. It’s not that anything outside of us really changed, it’s that we’ve taken ourselves to another parallel reality and are now getting a reflection of a completely different Earth. 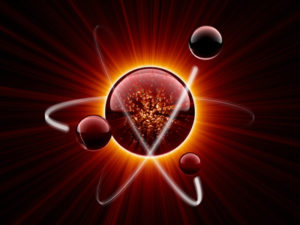 What makes up our reality, at the subatomic level, also reflects the Trinity. An atom is made up of the positively charged Proton, the negatively charged electron, and the neutral Neutron. Even the Proton and Neutrons have a Trinity of Quarks in each. The neutron itself is actually capable of breaking down into a Proton and Electron. So because the Neutron contains both and is larger, so then does neutral reality have the ability to be perceived in both Positive and Negative circumstances.

The electron, which is the smallest, represents the negative energies and the separation from Source. The Proton, which is larger, represents the positive energies and connection to Source. Physical reality is not really real. So belief systems, both positive and negative, must do something to perpetuate themselves to seem as if the reality is real so we can have a physical experience. But when it comes to positive beliefs, they are reflecting to us the true nature of our being, the powerful, creating loving existence. The negative beliefs, which are illusions, have to actually work harder, to get us to believe in them about an idea that is fundamentally not true about ourselves.

Electrons do not orbit the nucleus of an atoms like our planets around the Sun, that is an outdated model. Physicists now realize that electron exists in what is termed a “probability cloud” where they exist in this hazy cloud that surrounds the nucleus. But where they are, we don’t know, until we take a measurement and freeze where it is, but then we really don’t understand what it’s path has been. But when it’s moving we don’t really know where it is. 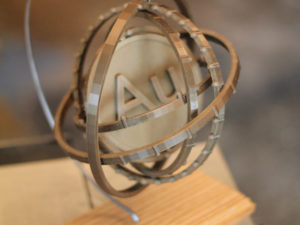 So the electrons are similar to negative beliefs that resemble this hazy, ambiguous cloud that we really can’t get a grip on. And it fools us into thinking there is something going on, but in reality, are only probabilities and potentials, and are not really solid at all, until we decide that we are going to take a particular idea, a particular definition (which is the same as an observation or measurement, scientifically speaking) and in taking that perspective, and taking that measurement, then we get what we designed the perspective for, we get what designed the measurement or the experiment for. That’s the result we get. And they use fear to stay hidden in the hazy cloud.

On the other hand, the Proton is easy to see and measure. It doesn’t have to hide, it doesn’t have to fool us, one way or another, it is showing us our nature. So, when we are looking at the Gold, for example, we are really looking at the Protons, because it’s the Protons that determine what the element is. So, they are easy to see, but those electrons, those sneaky little electrons, very tiny, buzzing around in their cluster of probabilities and possibilities, shows us a direct correlation of the energies states themselves exist and how they crystallize into our physical reality.

Who we are interacting with is our version of them in our reality. They are made out of our consciousness. It’s not saying there aren’t other people there. But what we interact with in physical reality is made out of our consciousness. So they are simply acting as reflections to us, to help put us in touch with more of our self, so we can decide more concretely what is preferable to us or not.

Any relationship, all relationships, are for the purpose of everyone in the relationship helping to reflect to the other person what they need to know to become more of who they are. And to let go of who they are not. So any encounter, any interaction we’ve ever had with any verion of any person has been for the purpose of helping us decide who we really prefer to be and acting accordingly. But the action must come. We cannot just decide to be someone and have no commensurate action that goes with it. Our behavior must match who we say we’ve become.

So if we say we’re this exciting being that has all these exciting ideas, but we’re not acting on them, we’re not doing anything with that new excitement, then we’re not behaving like we really believe we are that person. If we have in our mind’s eye, a picture or vision, of our ideal reality, and if we actually watch really closely how that person behaves, we will see more often than not, that they are behaving very differently than how we are behaving in our daily life. All we have to do is actually behave like that person behaves in every given situation. And when we behave like they do, that person in the ideal scenario, we will then have their life.

That is what our imagination is for. Our imagination is the portal to talk to our Higher Mind, so that our Higher Mind can give us an example of the feeling and frequency of the behavior of the state of being that represents our highest ability to attract to us, “manifest”, the idea that best represents that state of being. And we don’t even have to insist that it’s got to arrive the way we’ve imagined it. That’s just a template, just to get our engine moving, just to give us that state of being. It’s just a placeholder, just a symbol, it might manifest exactly how our simply mind has pictured it, but it might not. So don’t insist on it. Remember, the Higher Mind can actually see farther, and bring us a situation that is even better than we imagined.

There are several themes. A particular theme is represented as the greatest challenges in our lives that we are exploring at that moment. They all have to do with the idea of transformation; from negative to positive. That’s the general umbrella theme, but we can express our themes in any number of ways. These are best expressed through the idea of acting on our passion, and then finding out what challenges come up that we need to face or process ourselves through that is the basic mechanism that we use.

So, everything that happens is an opportunity and a challenge to move forward and expand. It’s not so much about what happens but what we do with it. It’s how we respond to it that determines our ability to change in the ways that are aligned with who we Truly are.

When we are following our passion, to the best we are able, with no insistence on the particular outcome, it opens the toolkit of excitement that contains all the necessary tools that start working for us. The tools become the driving engine that is our passion moving forward, it is the synchronicity, that is the organizing principle, that brings to us the circumstances and information in the correct order at exactly the right time, in the way we need to act on them.

Synchronicity give us the path that connects us to all other expressions of our excitement in life. It brings us everything that will support us in whatever abundance that we need to be supported that allows us to act, it brings us the reflective mirror that shows us what’s in our unconscious mind that might be out of alignment with our highest passions so we can identify and let it go, and bring that energy into our alignment, and it gives us everything that is relevant in our life. That’s the complete kit.

All we have to do is stay in a positive state, that no matter what happens, we identify that it can serve us in a positive way, so we’ll get the positive effect from it.