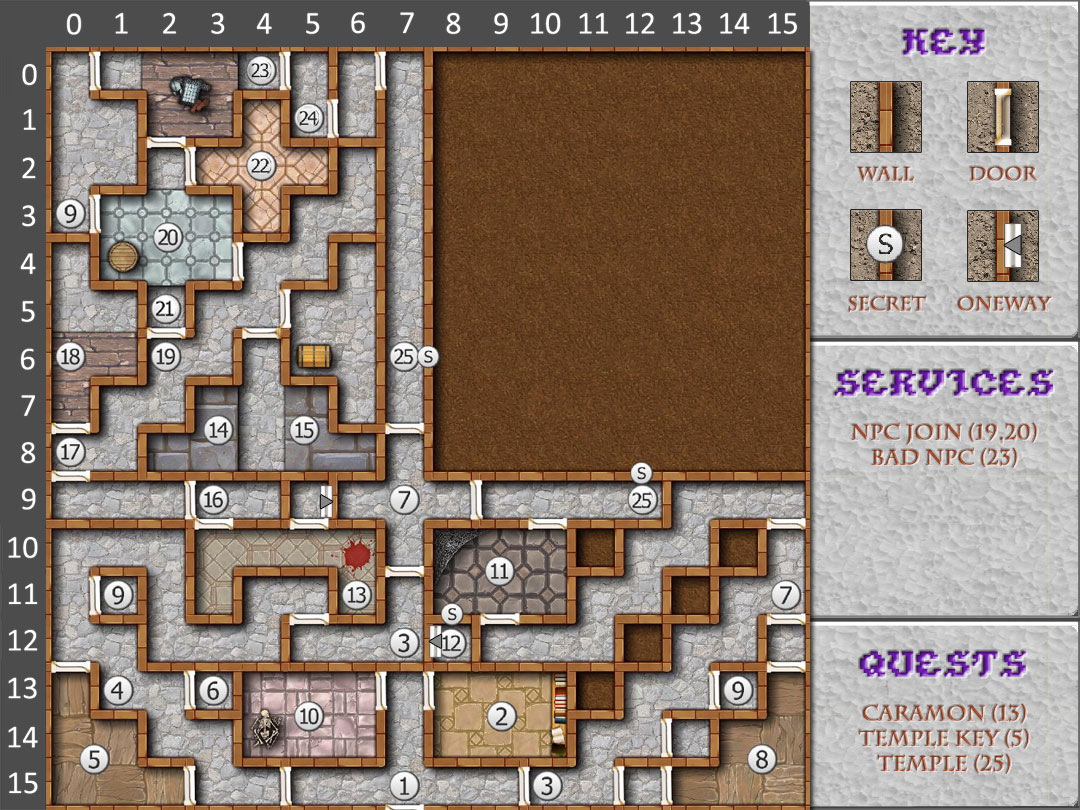 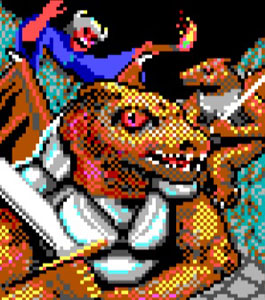 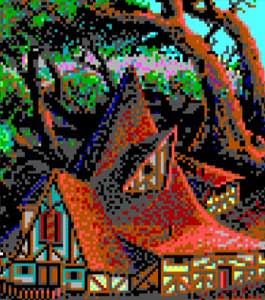 Synopsis: You have been sent by Sir Karl Gaardsen to find Caramon in the ‘abandoned” city of Throtl. Throtl was built by hobgoblins and was deserted after the War of the Lance. As you enter the city, you realize that the information you got is extremely out of date. You are stopped by hobgoblin guards that try to kick you out of town. As you penetrate deeper into the city, you find evidence that fighting has been going on between the forces of evil and the troops under Caramon.

Goals: You must find and rescue Caramon from the clutches of the evil forces that have retaken Throtl. After Caramon’s rescue, you must defeat a Cleric and his undead minions in the southwest corner of the city, in order to get the key to the Temple area. The Temple lies in the northeastern quadrant of Throtl.

Note: There are many traps in the city. You should have a thief with you if you wish to pass safely.

If you leave the city for any reason, such as getting trained at the outpost, any NPCs that you have picked up in Throtl will leave you. Those NPCs are lost forever, so you should not leave Throtl, once you have added the kender and knight NPCs to your party, until the NPCs leave with Caramon. There are many random encounters in the abandoned city and they vary radically in difficulty. For this reason, you should save the game often while you are exploring Throtl.

Giant Centipedes are particularly dangerous, as they can poison your characters, killing them instantly. You should try to obtain the scrolls of Neutralize Poison from room #9 as soon as you can.

Where you can rest: Room 9 is safe and you may rest freely there. Otherwise, you risk interruption but can probably rest for a short time without danger.

RANDOM ENCOUNTERS:
There are six random encounters possible in Throtl, but this number is reset every time you leave the city to either the temple or the overland. The number of monsters you will encounter is usually small. The types of creatures you will encounter include giant rats, giant centipedes, hobgoblins, skeletons, zombies, ghouls, baaz draconians, and evil spell casters. You should be very cautious when wandering Throtl, as some random encounters will include evil clerics and the dreaded black-robe mages. If you see these enemies in an encounter, you should try to eliminate them as quickly as possible.

Because of the danger of some of the random encounters in Throtl, you should go back to the outpost to rest and train if you are becoming depleted while exploring Throtl. Resetting the number of enemy patrols is not as bad as losing one or two characters because you were too weak to continue. 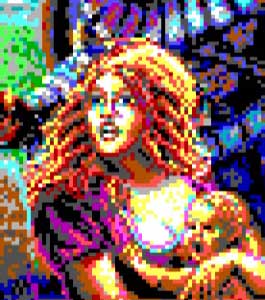 Objective: Find Caramon who has been lost in Throtl.

Starting location: The party starts in a small outpost just South of Throtl. You are told that Throtl is abandonded, however, that is a lie. Throtl is crawling with monsters ans patrols.

Armor: At the Armory, purchase Ring Mail (you will find Scale, Chain and 1 Plate Mail in Throtl) and shields for the appropriate classes. When bringing back loot to sell, bring back Scale Mail. The rest is only a few Steel Pieces, and take up slots, whereas Scale Mail can net 20 Steel Pieces or more each.

Weapons: Purchase long swords for the fighters and shorts bows and arrows for your second line if they can equip and use them. After selling loot, purchase more arrows for your archers. You don’t have to Detect Magic on magical items right away to receive their benefits.

Experience: You can upgrade your party’s level at the Hall. You should probably wait until Throtl is cleared out and Caramon is found before upgrading, since you’ll need all the experience of the area to level up. And each time you leave Throtl, the random monsters reset.

Quests: Upon entereing Throtl, you are immediately attacked by the guards. Although the Clue book mentions only Room 9 as a safe place for resting, I found that resting in other rooms less than 6 hours went uninterrupted and I was able to heal the party and re-memorize all spells so I didn’t have to leave Throtl.

Leaving: Once you have the Temple key, go to area 25. 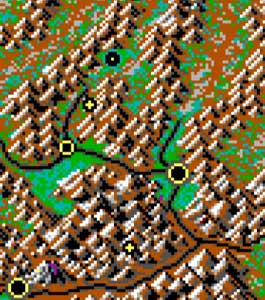 The adventure begins after the good armies have recovered lands seized by the Dragon Armies in the War of the Lance and pushed the evil forces from the continent. After establishing outposts to watch over these territories, the good forces withdrew. Your party is
sent to man one of these outposts.

Supposedly the main evil forces have long fled and only the occasional wandering monster remains. On your first patrol, you find this just isn’t so. You find draconians ambushing agroup of the good settlers who have been moving into the reconquered lands. You defeat the baaz draconians. An aurak draconian, who could easily destroy you if he chose, seizes an ancient book. He takes this and Dimension Doors away, ignoring you as beneath his notice.

Returning to the outpost to report all of this, you find Sir Karl, aknight sent to investigate strange reports from the outposts, battling the outpost’s commandant. Sir Karl kills the commandant whose body changes into that of a sivak, a draconian warrior/assassin who assumes the shape of his victim.

From this and your report, Sir Karl quickly realizes that evil has been operating the outpost for its own ends, sending back false messages that all is well, while systematically wiping out the good forces sent to keep an eye on things. One of these forces is now in the (supposedly) abandoned hobgoblin city of Throtl, just northeast of the outpost. The force is led by Caramon Majere, one of the heroes of the War of the Lance. You are sent to warn him of the danger.

“So! At last, you’ve come to rescue me. You know these things are quite clever. Not clever enough for me of course. I’ve just been improving them somewhat. Oh dear. I do hope you didn’t come through from the North .. .oh, sorry. “I suppose you’ll be wanting to get me out of here now. Oh, there are more people back there. Strangbourn is around here somewhere, He’s looking for Caramon.

His eyes clear for a moment and he becomes more lucid. “Listen to me,” he says, “they’ve captured Caramon. Most of our party has been wiped out.”

He suddenly jerks about. “What’s that! Get them! They’ve got Caramon. Find him. I’ll find him. North, north and west and south. Traps! Back up… go back now. Quiet, quiet, quiet…look out! above you! oh no, oh no, oh no… “

He gets a sly, slightly mad conspiratorial look on his face. “I saw a money chest in a room to the east. I’m gonna get it and I’m set.” He looks around and leans towards you, “You wanna help! Huh, what d’ya say?”

The terrorized look comes back. He screams and gasps in terror.

“I was with a party of knights and others under Caramon that came in here to explore. We haven’t really found anything. Caramon’s already left to report. I guess you must have missed him.

“Oh, one thing we did find out was that there is a treasure left over from the previous occupants of Throtl . We got word of it from a hobgoblin who was sneaking in to claim it. Before he died, he told us that it was located in the south-central area of the city. Tell you what, if you help me find this treasure, I’ll split it with you . All right?”

“Listen, Sir Karl is the most honorable of men. I would follow him anywhere. But there is something very dark and strange going on around him . He seems obsessed with a young girl named Maya. The fact that he’s about 40 years older than she is isn’t really the problem; if they’d just settle down and declare themselves! All that would happen is that a few gossips will snicker and that’ll be the end of it. But they won’t do that. Maya is extremely valuable to us. She has sources of information that are astounding, especially for one so young. But whenever the two of them are in the
same room the tension is so obvious that…

“Ah, never mind. You say that he seems to be all right. I will go on that hope, and let troubles find me in their own good time. Let’s go.”

“After the battle I was taken to see a powerful cleric. He laughed at my defeat. They led me to some doors that glowed in the darkness, opened them with a key that he pulled from his robes, and took me to a dark temple. I saw a bronze dragon egg on the altar! He told me that they were going to start the corruptions again! Then he had his minions beat me.

“I woke up here . If it hadn’t of been for the treachery of a dark elf, and a sneak attack from behind, they never would have captured me.” He pauses . “I’m sorry for my men .” he says, ‘They had no idea what we were getting into. Krynn’s blood, I didn’t know either. We were unprepared for the extent of the evil forces. ‘The ambush was a complete surprise.”

She explains to Caramon, “I’ve been sent by Sir Karl to get you back to the Outpost. There are rumors that large forces of draconians, hobgoblins, minotaurs and others are gathering . We need you to direct scouting and raiding operations. I see now that things are worse than we thought. Throtl was supposed to have been abandoned.”

Caramon says, “It’s even worse than that. I have seen Brass Dragon Eggs!”

She gasps, “No! They must not do this again!” Then she pauses, “Wait, how can they do it? I thought the process was lost during the War of the Lance . Did you see any evidence that they were successful?”

“No,” says Caramon, “I was knocked unconscious before I had a chance to look further.” He turns to you . “I need you to investigate this matter. Find the key, and go to the old temple in the Northeast part of the city. Find out what you can.”