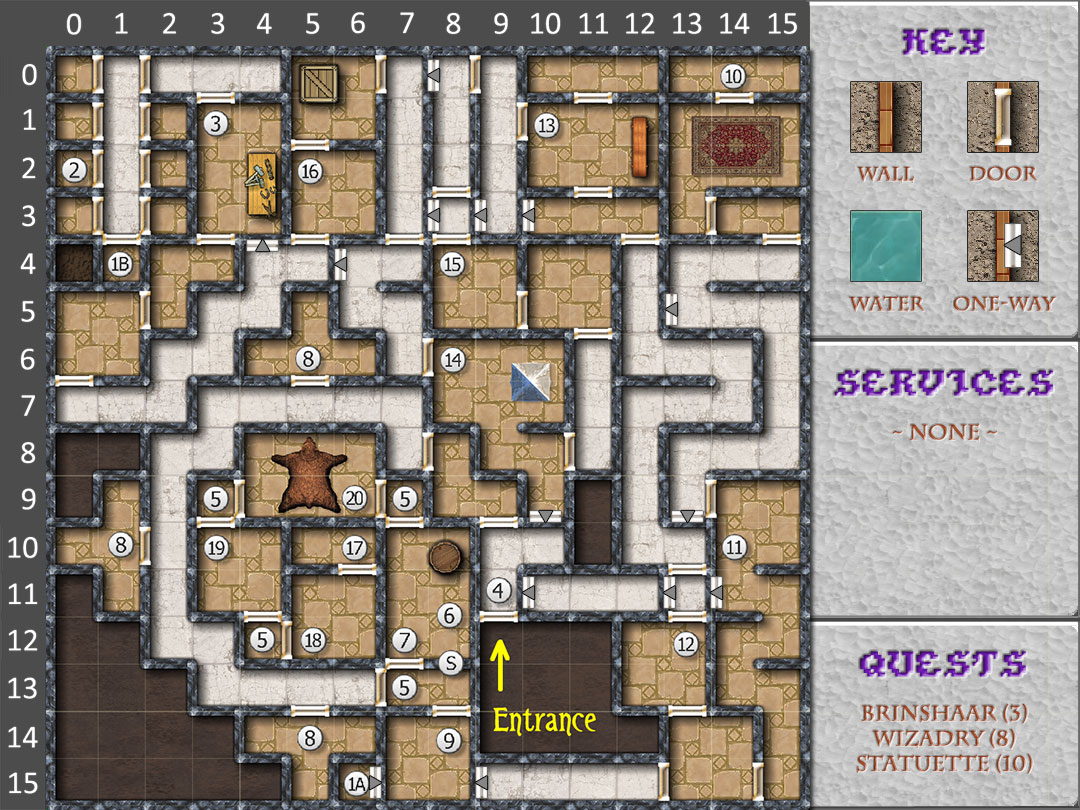 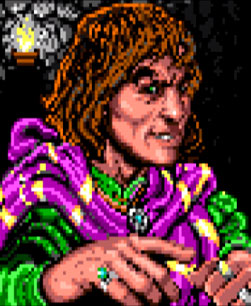 1. Tunnel – Once the party steps into this room (1a) a door clicks shut behind them. They follow a narrow passageway and find themselves at the entrance to the Hosttower dungeon(1b). There is no apparent way to return to the Hosttower above. By following the map of the dungeon the party can return above ground after only a few battles if necessary. Gaining the statuette of the East requires several additional battles.
2. Dungeons – Searching this tiny cell reveals a map of this portion of the Hosttower dungeon.
3. Brinshaar – A group of owlbears are threatening a man chained to the far wall. They attack the party.

After defeating the owlbears the party releases the man. He tells them his name is Brinshaar, and that he is a magic-user captured in Neverwinter and tortured in an attempt to learn about the city’s magical defenses . Brinshaar is actually one of the Hosttower’s evil magic-users, and was imprisoned in the dungeon for trying to steal the very statuette the party seeks to recover.

Brinshaar offers to join the party. If the party accepts his offer he helps them and later attacks the party when they try to take the statuette from the tower. If he is rejected he tells the Hosttower mages of the party’s mission and helps them defend the statuette.

4. Entrance – This is the point where the party enters the Hosttower of the Arcane from the streets of Luskan.

If the party leaves through this door without the statuette and Brinshaar is with them, he refuses to go beyond this point. He secretly returns and tells the Hosttower mages about what the party is trying to do and then helps them defend the statuette.

If the party tries to leave the Hosttower with the statuette of the East and Brinshaar was won, he reappears here and attacks with a group of displacer beasts. Use Charm Person and Hold Person spells as well as missile weapons to try to take Brinshaar out before he can cast spells on the party. Then use Stinking Clouds to slow down the displaces beasts.

5. Ramps – These are steep, curving ramps that lead from floor to floor of the Hosttower.
6. Secret Door – The secret door in the south wall of this room leads to the Hosttower dungeon.
7. Encounter – Several owlbears attack the party here. This is the only battle the party needs to fight in the Hosttower itself to gain the statuette of the East, since the magic item the party needs lies down in the dungeon. Going up the tower from here only leads to tougher and tougher battles with more and more owlbears and Hosttower wizards.

These battles can be fun and rewarding …but only if the party is tough enough to win them. If the party goes up the tower, they should rest, heal, rememorize all spells, and save the game before each new battle.

8. Library Mages – These are small libraries where the mages study. The first time the party enters a library they face a Hosttower wizard and a guard. Each time the party enters a library the opposition increases to 2 wizards, 3 wizards, etc. After the party has won the fifth of these combats-a very difficult battle-the libraries are all empty.
9. Encounter – Several skeletal fighters attack the party here.
10. Statuette (Quest) – This is the room where the statuette of the East is hidden . Zhentil fighters, manticores and a Hosttower wizard are admiring it when the party enters . If the party wins this battle, they get the first of the four magical statuettes needed to win the game!

If the party rejected Bhnshaar’s offer of assistance, he has told the makes about the party and they are ready for their attack. Brinshaar fights with them. After the Hosttower forces are defeated the party finds the statuette of the East. If Brinshaar is with the party, after the battle he excuses himself and leaves.

In addition to the statuette of the East, the treasure in this battle includes Bracers of AC6, which help a magic user survive tougher battles. 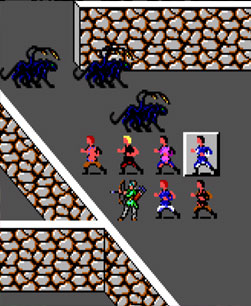 Synopsis: The Hosttower of the Arcane in Luskan is home to a group of evil magicusers who take their name from the tower.
They are allied with the pirates who run the city.

The Hosttower is where the party recovers the statuette of the East, the first of the statuettes they need to find to complete the game.

Rather than being in its logical place at the top of the tower, the statuette is actually hidden in the dungeons beneath as additional protection against its theft. If the party tries to ascend the tower they face increasingly difficult battles until they finally reach a dead end. They must find the secret doorway that leads to the dungeon in order to
claim their prize.

When travelling through the Hosttower dungeon, follow the map carefully. Many one-way doors are scattered throughout the
dungeon to make unwary adventurers travel in circles, and only by using a map of the maze can the party avoid being ensnared in one of these endless loops.

Once the party finds its way into the Hosttower Dungeon it has to fight its way out. Be sure to save a game in Luskan before entering the Hosttower.

Resting: The party can rest safely in the dungeon areas after they have eliminated all the wandering skeletal fighters.

Wandering Monsters : In the dungeon, 5 groups of skeletal fighters attack the party. In the Hosttower itself, strong groups of Owlbears are encountered there is no limit to these combats. 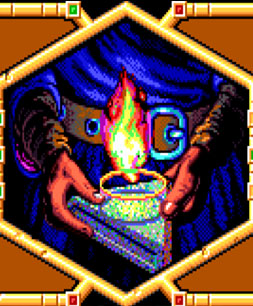 Objective: Find the first Statuette (10). This is one of four statuettes needed to finish the game.

Experience: Plenty of experience in the Hosttower. Prepare accordingly before each encounter. Take advantage of rest to recuperate hitpoints and spells. Clear out all 5 mage battles in the library (8) to reap the maximum experience points from that encounter.

Quests: Finding the statuette is the first part of the main quest which is to recover all four statuettes. Use the experience and magical items you have received to vanquish all opposition.

Magical Supplies: After defeating the enemy guarding the statuette, the party will receive Bracers of AC6, which is useful for magic-users.

Leaving: After obtaining the statuette, head to Tuern for the Meteorite Ore. 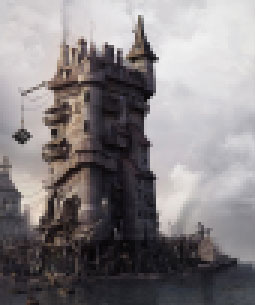 The first known account of the Host Tower’s existence comes from a Northlander oral tradition recorded in 1237 DR by a loremaster of Waterdeep.

Erected by the netherese arcanist Melathlar in -354 DR to protect Illusk from phaerimm attack, the effort cost Melathlar his life. Twenty years later, another arcanist, named Maerin, was involved in creating a magical siphoning system that took seawater from the Sea of Swords and transported it via roots ‘grown’ from the Tower to the burgeoning underground settlement of Gauntlgrym, where elemental magic fuelled by the water kept the primordial Maegera under control.

In 95 DR, the Tower became home to all of Illusk’s wizards as it was a refuge from Uthgar Gardolfsson’s attacks, however they were driven out instead by an upstart from within Illusk itself. With wizards banned from the city, nobody noticed that the Tower was still occupied by the former wizard rulers of Illusk, the Grand Cabal, but they quietly weathered no less than three orc hordes, who failed to enter or damage the Tower.

It was not until 806 DR, while resettling the ruins, that Laeral Silverhand entered the tower and encountered the Cabal, now all liches. She sealed the ancient spellcasters within the tower for half a millenium until the arrival of Arklem Greeth, who managed to bypass Laeral’s magic and free the remaining members of the Cabal, who helped him set up the Arcane Brotherhood.

The Brotherhood became the true rulers of the city, now known as Luskan, and based some of their organization’s power structure on the architecture of the Tower. However Greeth, having become a lich himself, felt the need, in 1376 DR to break his staff of the magi. The resulting explosion nearly levelled the Tower and killed most of its inhabitants.

By 1479 DR, the Tower was a strange ruin haunted by undead and the locals would not go near it.

In 1487 DR, an effort is mounted to reconstruct the Host Tower by Catti-brie, Gromph Baenre, Lady Avelyere, and others via the primordial Maegera, and the root system connecting to Gauntlgrym. The dwarves of Gauntlegrym marshal numerous raw materials, including the recovered original stone of the Host Tower, and the primordial “grows” the structure at the behest of Cattie-brie.