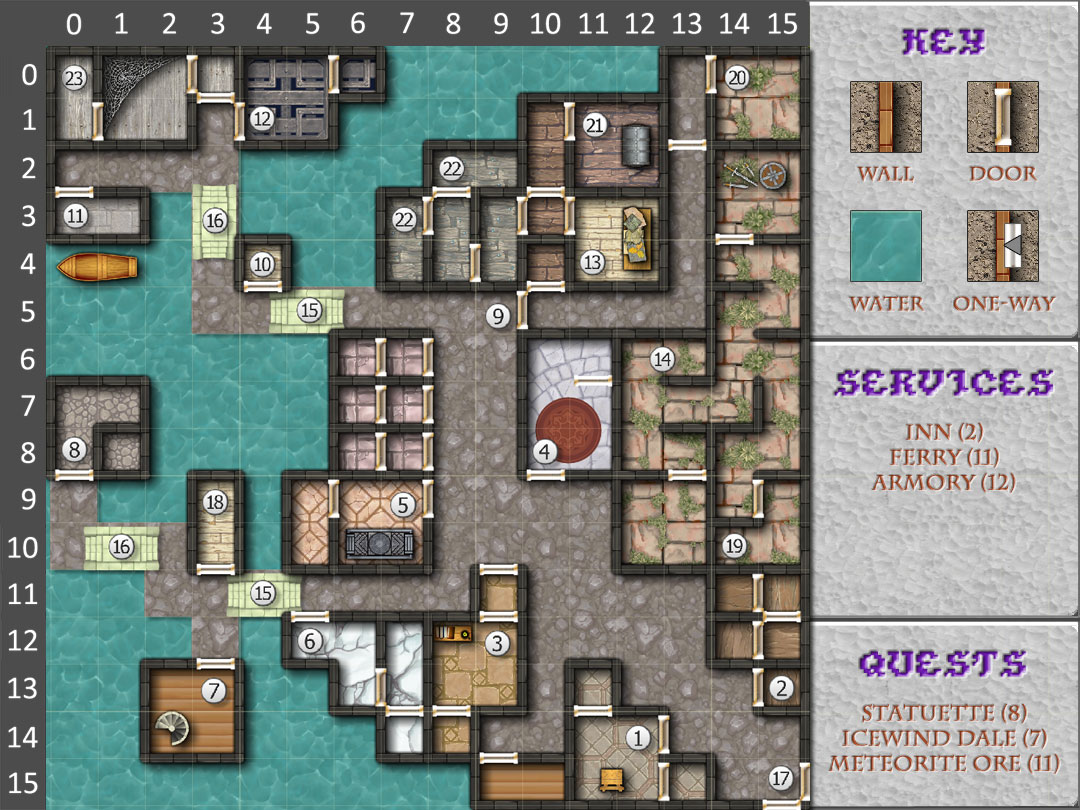 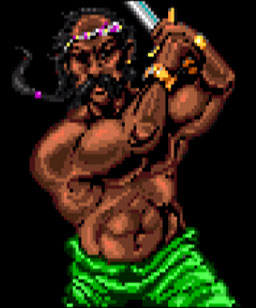 1. The Captains’ Court – This is the town hall of Luskan. An officer here tells the party that the captains are at their palaces receiving their annual gifts of magical treasure from the local sea captains.
2. Inn of the Northern Passage – The party can leave or fight here.
3. A captain’s lodge – This lodge is made of hand-cut timbers. A group of pirates are here with their gift, and attack when the party enters the room. Defeating them earns the party a Wand of Ice Storm, with 3 uses.

Against the pirates a Sleep spell takes out some of the opponents. The Hold Person spell is also effective . The surviving enemies rush into hand-to-hand combat, so set up a good defense line with the front row and then place the bowmen and spellcasters in the rear.
4. A captain’s palace – This palace has high stone walls. The waiting area contains several pirates. They attack the moment the party enters. Defeating them earns the party a mace +1.
5. A captain’s fortress – This palace is built with high stone turrets . Here in the anteroom several pirates stand waiting, and attack the party as they enter. Defeating them earns the party 20 arrows +1 .
6. A captain’s mansion – This mansion is hand-crafted stone walls. A group of pirates is standing impatiently with a gift, and attack the party immediately. If they defeat them the party gains a fine composite bow +1 .
7. A captain’s tower – This tower is built on a promontory in the harbor. A large group of pirates is waiting to present their gift, and attack the party on sight. If they defeat them the party gains their magical gift, a Sword of Icewind Dale +1, which does double damage against fire-based monsters (efreeti, fire giants, salamanders, etc.) This is the toughest of the pirate magical gift battles, but also has the most valuable reward.
8. The Hosttower of the Arcane – This is the location where the statuette of the East is hidden . The Hosttower is a very dangerous place. Before entering the Hosttower, go to the inn to heal the party, memorize spells, and save the game. If some characters are close to advancing a level, it may be worthwhile to return to Neverwinter briefly to train them and strengthen the party before entering the Hosttower.
9. Gate – The gate to the east leads to the old city.
10. A fisherman – The fisherman explains that the River Mirar is too treacherous for travel by boat.
11. Company of the Brazen Pennant – This is the dock from which the party sails to the island of Tuern and on to Qundarlun and the Purple Rocks. A ship is scheduled to leave for Tuern each morning at 8:00-if the party reaches the dock between 7:30 and 8:30 they are offered the chance to board. The trip to Tuern costs 100 gold pieces for the entire party.
12. Red Dragon Trading Lodge – An arms and armor store.
13. Fish Processing – A fish processing business is here.
14. Old City – This is the oldest part of Luskan and is referred to as the ‘Old City’.
15. Bridge – This is a bridge between the mainland and an island in Luskan harbor.
16. Bridge – This bridge connects two islands in Luskan harbor.
17. Guards – If the party tries to leave the city with the statuette of the East, the pirate guards here recognize them and attack.
18. Encounter – A small group of scraps are living on this abandoned pier. This is an especially tough battle because the layout of the pier allows the scraps to all attack the party at once.
19. Margoyles – A small group of margoyles are hiding in this room, using their natural camouflage to surprise the party. This is a very difficult battle because only magical weapons can damage these monsters.
20. Margoyles – A small group of margoyles are hiding in this room. See note for #19 above.
21. Encounter – A small group of scraps attack the party here.
22. Encounter – There is a 50% chance that a small group of scraps attack the party in either of these places. They may attack in neither or in both.
23. Encounter – A small group of scraps attack the party in this warehouse. 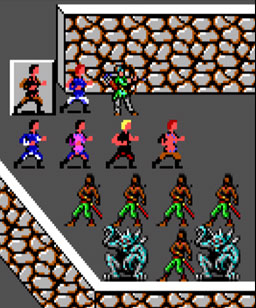 Synopsis: Luskan is a coastal city inhabited by northmen. The five High Captains who rule the town present themselves as merchants, but are actually retired pirates. They continue to demand tribute from both legitimate sea captains and buccaneers for the right to use Luskan’s port and sail in safety through nearby waters.

Allied with Luskan’s pirate leaders are the evil wizards of the Hosttower of the Arcane, located on an island in the city’s harbor.

When the party arrives here the pirate captains of the north are bringing their annual tribute to the High Captains. This tribute takes the form of magical weapons, and the party can gain these treasures for themselves by fighting a series of battles with the pirates as they wait at the leaders’ houses . Margoyle guards-vulnerable only to magical weapons-assist in the defense of the five houses. The battles are all tough but winnable, and several of the magic items are of use throughout the rest of the game.

Hint: Luskan is an appreciably harder region than those described earlier in this book. If the initial battles here seem too tough, take the party and explore elsewhere in the earlier regions to build up more experience points and advance to higher levels.

Have characters who possess magical weapons positioned carefully whenever fighting margoyles, since they cannot be damaged by normal weapons.

Resting: The characters can rest in the Inn, and in any non-street location . After the monsters have been cleared from the old city it is completely safe for resting.

Wandering Monsters: In the Old City five small groups of Otyughs attack the party. These battles tend to take place in narrow streets, where the party can have fighters in front and bowmen and magicians in back and fight the battle from as long a range as possible. Since Zhentarim allies control all the other streets of Luskan, no wandering monsters are found there.

Objective: Secure the first statuette located in the Hosttower of the Arcane (8).

Experience: Luskan is a pretty chaotic town You will be attacked by pirates visiting the High Captains for their annual tribute. The fighting here is harder than previous encounters. Use the Inn to rest and recovery hit points and spells. There is no training hall, so if you level up here, it’s worth returning to the Neverwinter Training Hall before entering the Hosttower.

Quests: While the Hosttower appears as a small room on the Luskan map, it’s actually it’s own full map and encounter area. Make sure to clear out Luskan, level up, heal the party, and memorize your spells before entering the Hosttower.

Magical Supplies: The pirates have brought exquisite treasure with them to Luskan and you will receive these for clearing out each of the 5 High Captain locations. These include a Fine Composite Bow +2 (which factors in your Strength Bonus), +1 Arrows, Wand of Ice Storm, a Mace +1, and the Sword of Icewind Dale +1, which does double damage against fire-based monsters.

Leaving: After clearing Luskan, head to the Hosttower at location 8 to retrieve the first statuette. Make sure your party is ready.

Built on the ruins of the ancient and magical orcish city of Illusk, Luskan was a port town frequented by pirates, thieves and other disreputable folk interested in money. Although life within its walls was dangerous, Luskan was a very lucrative city. Pirates brought in their goods to be sold to the black market, northern traders frequented the place as a rest stop on their way to the Ten Towns during the warmer months, ready to buy exotic scrimshaw ornaments, several taverns traded in ale and other spirits, the drugs and slave trades were rife (although obviously sublimated) and information brokers and prostitutes plied their trade during the night-time.

There was a period in Luskan’s history during which dwarves from Mirabar would paint Luskan sheep different colours in acts of defiance, but as of 1370 DR this practice had ended after savage reprisals from the Luskanites.

Luskan had a history of waging war against lesser naval powers,[16] and defeated Ruathym (not for the first time) in 1361 DR It withdrew when faced with war against the Lords’ Alliance. Luskan has previously been defeated by Gundarlun, Lantan, Mintarn, Orlumbor and Tuern. The conflict against Lantan was disastrous enough that inhabitants of Luskan did not even acknowledge its happening. Inland, Luskan would attack Mirabar and the tribes of Uthgardt in order to keep them submissive.

In the autumn of 1376 DR Luskan was attacked by an army of mercenaries led by Lord Brambleberry of Waterdeep and aided by the famous Captain Deudermont. The attack destroyed the Hosttower and the grateful populace installed Deudermont as their governor. Although he tried to rebuild as many homes as possible before winter set in, supplies were scarce and most food came via Ship Rethnor in the form of a strange tangy meat and edible fungus. People were being murdered every day for this food and those who weren’t prepared to kill for it, starved. When supplies from Waterdeep were sent to aid Deudermont’s new city the land caravans were attacked by bandits paid for by Ship Rethnor and the fleet of trading ships that was supposed to dock was attacked by Arklem Greeth, who had (unknown to all) survived the Hosttower’s destruction. Barely any of the supplies arrived and then Kensidan had Suljack murdered, which sparked off a street war among the hungry masses and guards who had been bribed by Ships Rethnor and Kurth. At the same time Arklem Greeth attacked Sea Sprite. When Deudermont’s corpse was found, it was all over. The survivors fled the city, leaving the four remaining captains to rule over the place, though Kensidan and Kurth would dominate Baram and Taerl. Luskan would become a free port, a place of trade where absolutely no questions would ever be asked.

Unknown to most, much of the resources and intelligence that led to this outcome were provided by Bregan D’aerthe who, once more led by Jarlaxle, wanted to share in the profits the free port would hopefully produce.