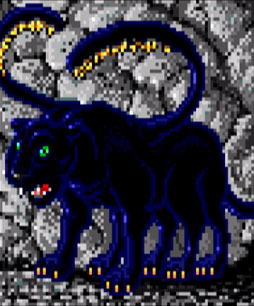 1. Helm’s Hull Works-Ship and Boat Repair – The man here tells the party about the Gallant Prince, a ghost ship found and moored at Port Llast.
2. Allis Lhyssich’s Hand Crafted Weapons and Magical Weapons for Noble Causes – Bring the meteorite ore the party finds on Tuern here and Lhyssich crafts it into a Sword of Stonecutting +3, which proves very useful in getting through Sundabar on the way to completing the game in Ascore.
3. Southwall Shop of Adventurer Supply – The party can purchase.
4. Villig’s Arms Supply and Armor Emporium – This shop sells stardard weapons and armor.
5. Inn of the Warn Water Way – If the party rests in the northernmost room of the inn they are ambushed by a group of gnolls. After defeating them the party finds a secret door hidden in the north wall that leads to
one of the indoor gardens that has been plagued by monsters. To have a safe resting place choose the Neverwinter Inn.
6. The Neverwinter Inn – Unlike the Inn of the Warm Water Way, here the party’s rest is not interrupted.
7. The Neverwinter Vault – Until the party receives the Card of Counting from Amanitas in Everlund this vault remains locked. Once they have the card it allows them to magically store and retrieve treasure at all 3 vaults (in Silverymoon, Yartar and Neverwinter) as if they were all one place.
8. Temple of Tyr – Healing services are available here.
9. Temple of Oghma – All temples in Neverwinter offer the same services for the same prices.
10. Garden – A small plot of ancient vines.
11. Lord Nasher’s Castle – Lord Nasher is the town leader of Neverwinter, and tells the party of the problems in the indoor gardens.
12. Hall of Training – This is the last Hall of Training the party finds in the west until they get to the island of Gundarlun. If any party members are close to advancing a level, be sure to return here and train them before setting out to sea from Luskan . If possible, train them even before they take on the difficult battles inside Luskan itself.
13. The Neverwinter Indoor Garden Society – The man here gives the party 20 arrows +1 to help clear the indoor gardens. These should be given to the best bowman in the back row. Don’t give them to Krevish-save them for use against the margoyles in Luskan and other monsters against which only magical weapons are effective.
14. “The Fat Man’s Table” (Tavern) – Fight or Leave are the same options here.
15. The River’s Heart-Shop of Magical Items & Curiosities – This is one of two magic shops in the game. The arrows +1 available here can help fight the margoyles in Luskan. The other items are expensive, but useful if the party has sufficient money. The store sells 3 different magic-user scrolls, the dart of-the hornet’s nest, arrows +1, and battle axes +1.
16. Neverwinter Boat Rentals – This shop only rents riverboats to travel up the Neverwinter River, to travel on the ocean the party must go to the docks in Luskan. There are no important places to discover on the Neverwinter River in this game.
17. Start – This is where the party lands when they return from the Islands.
18. Zhentil Encounter – If the party comes here with the statuette of the West after getting it in the Purple Rocks, they are ambushed by Zhentil fighters leading manticores. See the Indoor Gardens below for hints on fighting this
battle.
19. Indoor Gardens – In any of the Indoor Gardens displacer beasts or manticores may attack the party. After 3 battles in the Bus or Nebus Gardens no further attacks occur in either place. 3 battles also happen in the Zemaitis Gardens and 3 in the Neprazus Gardens before they are considered to have been cleared. On the third battle in each case the encounter is with one or more Zhentil fighters along with displacer beasts or manticores, since the Zhentarim have been causing the problems in the gardens to divert attention from their actual plans.

Don’t try to rest and recuperate in any of the indoor gardens until that garden has been cleared-the party is interrupted. The inn is always close by and is always safe for resting.

The Indoor Gardens in Neverwinter are a good place to toughen up the party and earn extra treasure before taking on the tough battles in Luskan . Consider taking the time to clear them and using the Hall of Training to advance levels before taking on the pirates to the north.

Synopsis : A pleasant coastal town set on a river that flows with warm water, Neverwinter welcomes visitors from all across the Realms. It is famed for its verdant, year-round indoor gardens, but the gardens are now being beset by monsters.

Neverwinter is the site of the only magic shop in the game outside of Silverymoon. There is also a weapons maker-magic user here who can make a sword +3 from meteorite ore if it is brought to him by the party.

Resting: The party can rest safely in the Inn, in any non-street location in town, or in any indoor garden where all the wandering monster battles have been completed.

Wandering Monsters: In city streets 4 large groups of stirges can be encountered. 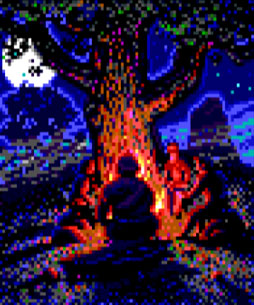 Objective: Clear the gardens of the Manticores and Displacer Beasts. There is a Magical Shop here that can forge a +3 Long Sword using Meteorite Ore. To get the Ore, rent a boat to Luskan, then take the Ferry to Tuern.

Experience: You will receive a significant amount of experience here fighting in the gardens. There is a limit to the number of encounters here as with each city, so it’s recommended to complete all of them. Level up at the local Training Hall. You will need the additional hit points, skills and spells for Luskan (the first statuette) and Tuern (the meteroite ore).

The Sword of Stonecutting: Made by a craftsman in Neverwinter (2) from meteorite ore the party can find in Tuern, this +3 sword does double damage against stone-based monsters. It is especially useful to help destroy the stone golem in Sundabar. After retrieving the meteorite ore from Tuern, return here for the sword.

Quests: This city will aid you on the main quest by providing you with a mighty +3 sword for the battle in Sundabar. It is also a good place to level and rest up as there are many shops and services here not found in the next couple of cities.

Magical Supplies: The Magic Shop here (15)  is a little less interesting than the one in Silveyrmoon, but it does offer some decent supplies. The supplies are a Dart of Hornet’s Next, a few Magic User Scrolls, +1 arrows and a +1 Battle Axe.

Leaving: Rent a boat and head to Luskan to take back the first statuette. 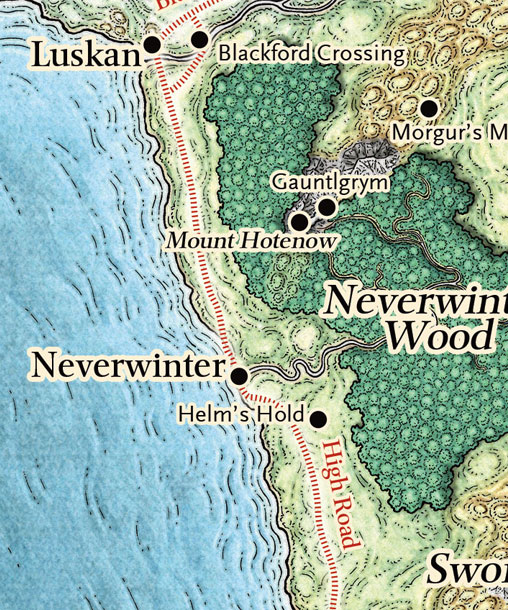 As of 1370 DR, the city was ruled fairly and justly by Lord Nasher Alagondar, an aging, veteran adventurer and devout worshiper of Tyr. As such, the Neverwintans followed a Tyrran faith that promoted justice and fairness, with greed being frowned upon. Lord Nasher ensured that the city was well defended before his death, both physically and magically, against attacks or infiltration from Luskan, Neverwinter’s warlike rival. Maps of the city were not allowed to be made as part of an effort to thwart Luskan spies.

While Lord Nasher was the nominal leader of Neverwinter, the real power in the city was held by the Many-Starred Cloak, an order of good-aligned wizards that supported the rule of Lord Nasher.

Lord Nasher rejected the position of King of Neverwinter for much of his life, accepting the title only in old age, by public acclamation.[4] After his death, he was succeeded by his son Bann Alagondar,[6] who founded the Alagondar royal family. The Alagondar line of kings and queens ruled justly and kept Neverwinter stable and prosperous even in the dark period that followed the Spellplague, until the destruction of Neverwinter after the eruption of Mount Hotenow, when all members of the royal family died in the disaster.

As part of his bid to create a mercantile empire in Neverwinter, Dagult Neverember created the title of “Lord Protector of Neverwinter”, held by Neverember himself, in 1462 DR. However, it was questioned whether Dagult was the rightful ruler, as many factions vied for Neverwinter and the citizens were divided in loyalties.[4] As he had to fulfill his obligations as Open Lord of Waterdeep, Lord Neverember left the day-to-day running of the city to General Sabine and Mayor Soman Galt.

In 1489 DR, Lord Neverember was exiled from Waterdeep and replaced as Open Lord by Laeral Silverhand.[26] After being ousted of his city and former position, Neverember then focused all of his efforts to his role of Lord Protector of Neverwinter. Due to this commitment and his past accomplishments helping Neverwinter and its citizens, the Neverwintans finally accepted Lord Neverember as their rightful leader.[24] Bitter over being exiled from Waterdeep, however, Neverember became more despotic than ever and enforced heavy-handed laws. He levied heavy taxes to noble families living in Neverwinter, preventing them from gaining significant power, while enacting harsh laws that prohibited the formation of new guilds and limited the power of existing ones.