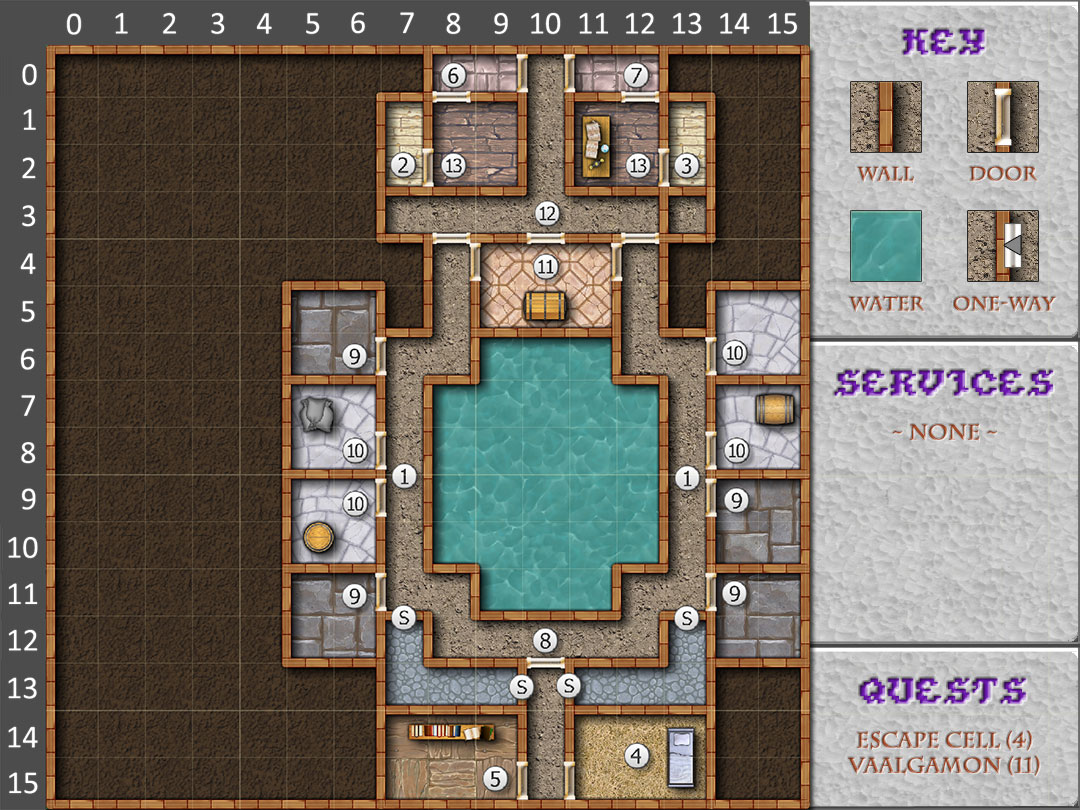 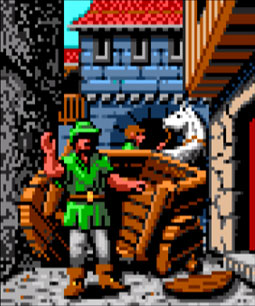 4. Prison Cell – This is the room where the party is imprisoned as they enter the region . If Krevish is with them, he points out an opening above the door through which a small party member might be able to squeeze. If Krevish isn’t with the party, SEARCH the room to reveal the grating.

Select a character to try and climb through the opening. Have the party’s thief attempt to do so-a character that falls suffers damage.

Once the party member has gotten through the grate open the door from the outside and the party is freed.

5. The Krakens’ library – This room is filled with information about the Forgotten Realms. Searching here finds a scroll with the spells Sleep, Magic Missile, and Stinking Cloud.
6. Small Room – Searching this room reveals a map of the Krakens’ fortress headquarters in the Purple Rocks.
7. Small Room – Another room filled with maps. Nothing special can be found here.
8. Guard Station – A small contingent of lizard men guards the corridor here . Just to the south of this door secret openings lie on both the east and west sides of the passageway. Use either secret door to avoid fighting the lizard men.
9. Encounter – There is a 50% chance that several giant frogs are in these rooms.
10. Encounter – There is a 50% chance that lizard men are in these rooms.

11. General Vaalgamon – The party surprises the leader of the local Krakens and a large group of Kraken spies here in the Captain’s office . Use Sleep spells to take out the spies, if the spells are targeted carefully the rest of the battle should be fairly easy. If the party has used up their Sleep spells before reaching this battle, try to force as many Krakens as possible to attack through a Stinking Cloud.
After the battle the party is rewarded with a +2 magical long sword-the same one stolen from the party at the Inn at the beginning of the game.

Rest in the Kraken Captain’s office after the battle, save the game, heal and rememorize spells. One especially difficult battle remains in this section of the game, and the party must win it before they can return to Yartar.

When they search the room they find a secret staircase leading out of the complex. They must take it to leave, but it leads to a catwalk suspended across the great aquarium. While the party is crossing, the catwalk gives way and they fall into the water, where they have to fight a group of young giant squid.

The water in the aquarium is deep enough to submerge the party to their chests . This slows down movement and makes the use of bows, slings and other missile weapons impossible . The spells Fireball, Lightning Bolt and Burning Hands do not work in this battle, since water makes them inoperative. If the characters have memorized these spells they will lose them when they fall into the water.
Make sure any magic-users are well-protected behind the rest of the party-a squid may try to move around the edges of the party’s front line to reach those in the rear.

Try to keep characters away from the squid until they can surround one and concentrate their attack. The squid’s tentacles can constrict a character that they hit in melee. Constricted characters can still fight by using the AIM Or CAST commands, but they are trapped next to the enemy and cannot move.

If the party can finish off two of the monsters quickly, the rest of the battle can usually be won even if all available spells have been expended.

After defeating the squid the party completes their escape, returning to the streets of Yartar in front of the Three Rivers Festhall, which is a haven for the local Krakens.

12. Guard Station – Lizard men guard the corridor here.
13. Encounter – There is a 50% Chance that Kraken spies are in these rooms. 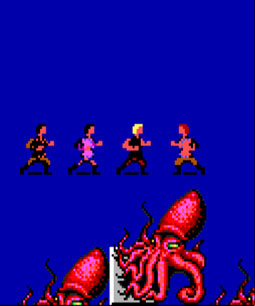 Synopsis: The first time that the party comes through Yartar after getting the Ring of Reversal, the Krakens are determined to stop them from upsetting the Zhentarim plans. They don’t know the party has the Ring, but they do know that they rescued Amanitas at Everlund. That means the party knows too much to be allowed to live.

As the party approaches any of the gates on the way out of town, the street in front of them is blocked by a broken wagon. A herd of sheep closes in behind them, trapping them. They are suddenly pulled through a secret door and down into the main Kraken complex, which is laid out in the shape of a Kraken, a huge ocean-dwelling giant squid of great intelligence and strength.

Here the party meets Vaalgamon, the Zhentarim general who is directing the collection of the statuettes and the conquest of the region . He dismisses them as insignificant opponents and leaves them to be disposed of by the Krakens.

Resting: The party can rest safely only after the Kraken captain has been defeated before then they are interrupted by Kraken spies. The difficulty of resting in the Kraken Complex makes saving spells and avoiding extra battles critical. Clo directly from the cell to the library to find the magic-user scroll, then go through the secret passage around the first set of lizard men guards to attack the Kraken Captain. If wandering patrols attack the party try to flee; if they can’t escape, ration their spells carefully so they have enough firepower left to defeat the Kraken Captain.

Wandering Monsters: In the corridors of the complex small patrols of Kraken spies and lizard men attack the party. Once the Kraken captain has been defeated there are no further wandering monster attacks. 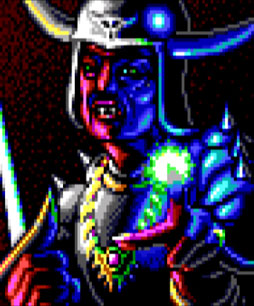 Experience: Although this map is only about half-sized, the party will receive substantial experience from both the General Vaalgamon and giant squid encounter.

Magical Items: The party will receive a +2 Long Sword after defeating General Vaalgamon. This sword is the same one stolen from the party at the Inn at the beginning of the game.

Quests: After re-entering Yartar with the Ring of Reversal, any attempt to leave triggers this part of the quest. The party will be captured by General Vaalgamon and imprisoned beneath Yartar.

Leaving: The next recommended city to visit is Neverwinter. 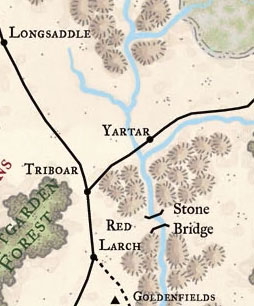 In 1361 DR, Baron Alahar Khaumfros attempted to further a plot to provoke the Lords’ Alliance (particularly Waterdeep) to war against Ruathym on behalf of the Kraken Society and Luskan. He was foiled in his attempt when Liriel Baenre, Fyodor, and Caladorn Cassalanter discovered the plot.

In 1491 DR, Yartarans were abducted by the elemental cults for conversion or sacrifice. These were mostly people who would not be missed; the poor and drunkards. The victims were held in the Temple of Howling Hatred. Members of the Hand of Yartar acquired a devastation orb from the Lord Protector of Triboar’s vault. They attempted to auction it off to the highest bidder. Lord Khaspere Drylund, a member of the Kraken Society, sought to bribe or blackmail corrupt officials to support his efforts to become the next Waterbaron.

The population had grown to the point that older structures were torn down and new, taller, buildings needed to be erected, some as high as four stories. The city was connected by a fortified bridge wide enough to accommodate two wagons with room to spare to a citadel on the west bank. There, the Evermoor Way (linking Triboar and Silverymoon) crossed the Surbrin. Yartar was a crossroads trading town, so it was always bustling with caravans entering and leaving its walls.

It was renown as a place for merchants, smugglers, mercenaries, and spies from all over the North to meet and conduct business. The Surbrin Trail ran north from the city through the hills on the other side of the Dessarin Valley toward the ruins of Nesmé. The trail hugged the eastern bank of the River Surbrin rather than enter the Evermoors. Yartaran soldiers patrolled the road.

During the three years between Shieldmeet, Yartar would host the Hiring Fair on a field north of the city. This event would draw thousands of outcasts, wanderers, barbarians, criminals, and adventurers from the surrounding area to sell their labor to farmers, merchants, nobles, and anyone else that may have needed workers or bodyguards. It was common for adventuring bands to form at the fair.