1. Gated Entrance – This gate marks the edge of Vttersea, which is built into the caldera of an ancient volcano. The guard here is sure the party won’t survive if they go up into the mountains.
2. Company of the Brazen Pennant – This is where the party can take a ship to Luskan or to CGundarlun . Ships are scheduled to leave for both destinations every morning at 8:00, arriving between 7:30 and 8:30 allows them to board the vessel of their choice. The trip costs the party 100 gold pieces.
3. Inn of the Ancient Whale – The party can rest here.
4. Lars Noneck Weapons Shop – Lars cannot craft magical swords from meteorite ore.
5. The King’s Palace – He tells the party about the meteorite ore and all the foolhardy adventurers who are dying while trying to discover it.
6. Fish Market – .
7. Encounter – This room is full of women making clay pots. They are being held prisoner by the pirates in the back room.
8. Magic Item – Kestutis, an old knight, lies here, bound and gagged by the pirates who are looting his castle. As a reward for saving him and to help them on their noble mission he gives the party the magical Armor of the Glacier +1 . It reduces fire-based attacks to half damage, and does the same for attacks by firebased monsters : fire giants, salamanders and efreeti. This makes the battles on the western side of the island easier to win.
9. Tanar’s Shop of Useful Items – .
10. Encounter – A group of pirates is threatening one of the potters in this room. After the party defeats the pirates, she tells of how the pirates have been holding the women hostage and buying meteorite ore from the fire giants.
11. Encounter – Kraken guards inhabit this hideout, preparing to search for meteorites. They have a map that indicates the meteorites may lie somewhere on the western side of the island.
12. Encounter – Efreeti live in this volcanic vent.
13. Encounter – Otyughs guard this room.
14. Encounter – Pirates are destroying this room and everything in it.
15. Encounter – Margoyles are hidden here. Only magical weapons can damage these monsters.
16. Encounter – Margoyles live behind this secret door. Only magical weapons can damage these monsters.
17. Encounter (Heat) – Salamanders live in this volcanic chamber. Only magical weapons can damage these monsters.
18. Encounter – Otyughs guard this room.
19. Possible Encounter – There is a 50% chance that a group of scrags are clustered around each of these hot springs.
20. Encounter – Northman warriors guard this room in the castle of the fire giants.

21. Encounter (Heat, Quest) – Fire giants attack the party in this tiny room. They are the ones who have been killing adventurers and stealing the meteorite ore they’ve found. See the chapter on Neverwinter for instructions on how to turn the meteorite ore into a magical sword that is very useful later in the game.

This is the only battle on the eastern side of the island that is especially useful to the party-all the others (against the efreeti, salamanders, margoyles, etc.) should be tackled only for the extra experience points and treasure by very strong parties. 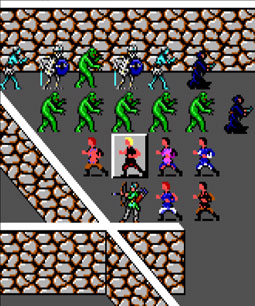 Synopsis: Tuern is a large island far to the west and north of Luskan . Occupied by northmen, it was recently struck by a great meteorite. The meteorite ore can be used in making magical weapons.

Close to the great volcanic fault that erupts in the center of the island, fire giants and other fiery monsters terrorize the local people. Even Vttersea, the largest town, is unsafe.

The party does not have to accomplish any missions on Tuern to complete the game, and can proceed immediately to CGundarlun . But, by finding meteorite ore and taking it to Neverwinter, they can earn a magical sword that proves useful on the way to Ascore at the end of the game.

Be sure that the party gets the Armor of the Glacier before seeking the meteorite ore – it makes the other battles easier. If they took the Sword of Icewind Dale from the pirates in Luskan it is also helpful against the monsters here.

Resting: The party can rest in Vttersea at the Inn or in any non-street location where there are no encounters shown. 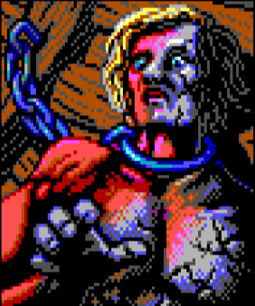 Objective: Locate Broadhand at his shop (Event 14) during the Festival of Mielikki.

Experience: Hopefully you took advantage of the experience from Nesme, as Silverymoon is not as abundant. Most of the encounters should still be pretty straightforward. The rescue of Erek, Amanitas’ assistant, will require a battle with two trolls. If you took care of the trolls in Nesme, and leveled up, this battle should be easy.

Festival: As you walk around the city, there will be various banners that will tell you when the Festival is. If you miss the day of the Festival for some reason, the week long timer will start over.

Quests: There are still no side quests, which may seem odd for many gamers, including me. There is still only the main quest. Clearing out all the areas of monsters seems to be the only side quests in the game. After rescuing Erek, you cannot return to Nesme without him leaving the party, as he is only interesting in proceeding to Everlund and recusing Amanitas.

Magical Supplies: Miresk’s School of Thaumaturgy and Shop of Magical Items sells Clerical Scrolls and Potions (Invisibility, Speed and Healing). You can also purchase Guantlets of Dexterity as well as +1 Arrows and +1 Daggers. If you’ve been racking up the gold, you should have enough for a few Healing Potions which can be very useful during a tough fight.

Leaving: Rent a boat and head to Everlund after rescuing Erek. Allow him to join the party and equip him with Bow and Arrows like Krevish to help in combat. 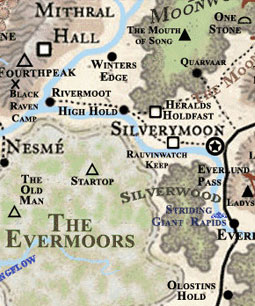