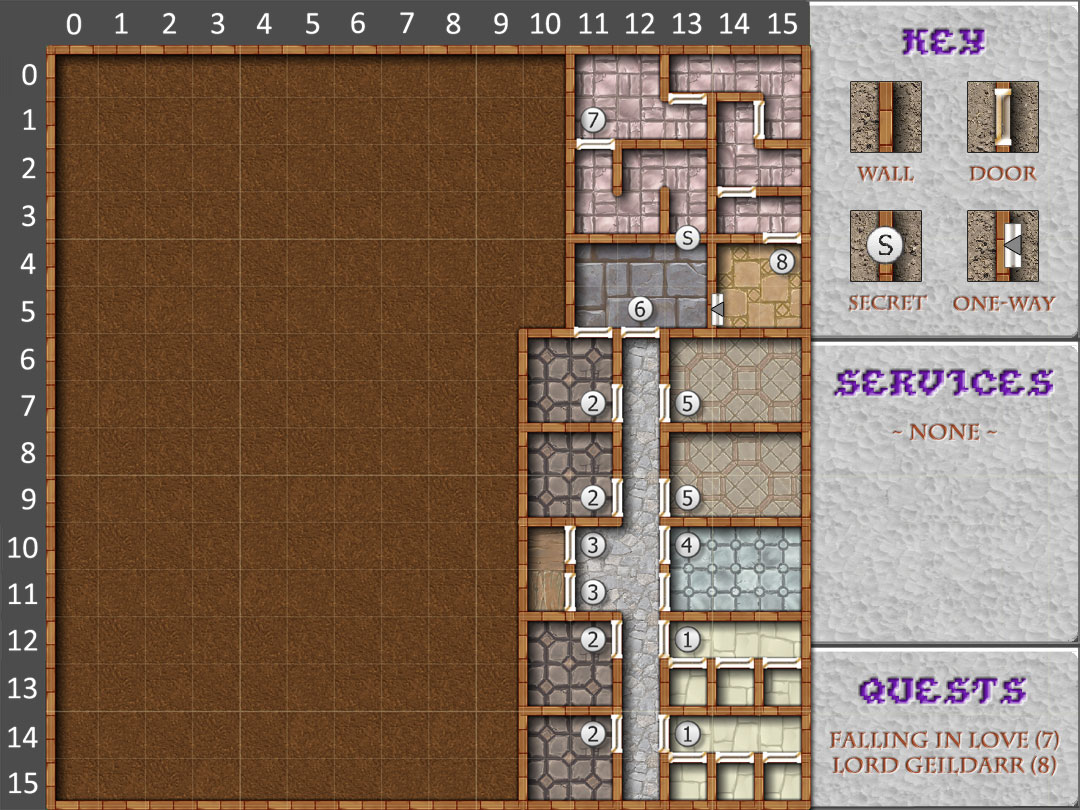 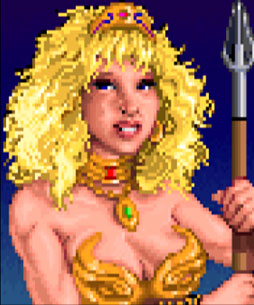 1. Food storage area – Carrion crawlers have moved in to scavenge here.
2. Barracks – Each of these rooms is a barracks, housing driders and Lordsmen. The troops are often on patrol, leaving some of the barracks rooms empty.
3. Stairs – To the west are the stairs that lead up from Geildarrs Keep to the city of Llorkh. The party may retreat from the Keep for rest or healing and then return to continue the fight.
4. Encounter – Hill giants and Zhentil fighters use this as a gaming room.
5. These two chambers house etdns and hill giants from Geildarr’s forces. They are often out on patrol, leaving the rooms unoccupied.
6. Encounter – Here a black-caped man is giving orders to a mixture of troops-an ettin, hill giant, and drider among them.
7. Cortarra’s chamber – The evil enchantress, Cortarra, resides in this chamber. When the party enters she attempts to deceive them by taking the shape of her prisoner, Siulajia. Confronted with the image of identical twins, the party must solve the puzzle to separate friend from enemy. Cast a detect magic, detect evil, or dispel magic spell, and the caster will see through Cortarra’s disguise . She will become angry and attack – along with her cockatrice pets and several of Geildarr’s Men.

After the battle, take care to collect all of Cortarra’s magical equipment. Among other things, the party will find a dagger+2 and a wand ofmagic missiles .

After the party has collected the treasure, Cortarra’s prisoner, Siulajia, steps forward to thank the party and to tell her story. If the leader of your party (i.e. the character at the front of the party when it descended the stairs into the Keep for the first time) is male, she will offer to join the party. She is a strong fighter and an excellent archer, so accept her offer.

8. Lord Geildan’s chamber – This is the site of the final battle in the Keep. As the party enters the room, Geildarr has cast a spell to animate a skeleton and is commanding it to attack a fighter he has captured . Once the party walks through the door, the skeleton (as well as the Krakens, Zhentil captains, and Hosttower mages who have been watching this event) turn to attack.

This encounter is in two parts; in the first segment the party must defeat the skeleton and the group of men with it In the second portion Lord Geildarr himself will attack, along with many guards. The captive whom the party saved from the skeleton will fight on your side in this second battle. His name is Jarbarkas.

If the leader of your party (i.e. the character at the front ofthe party when it descended the stairs into the Keep for the first time) is female, Jarbarkas will offer to join the party. He is a strong fighter and an excellent archer, so accept his offer. IfSiulajia is already in the party he will thank them for saving him, then depart. 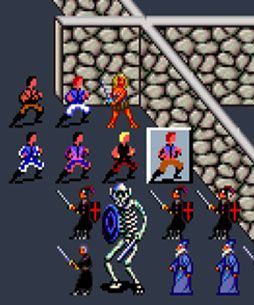 Synopsis: After murdering the last dwarven leader, Lord Geildarr and his Zhentarim supporters expanded the ancient underground dungeon now known as Geildan’s Keep. It is there that he resides, issuing orders to his forces.

Once the party has freed the rest of Llorkh and crushed Geildan’s forces there, they must go into the Keep and destroy Lord Geildarr himself.

Wandering Monsters: In the main hallways, Lordsmen and Zhendl fighters will be encountered. Around Cortarra’s area and near Geildarrs Chamber, Lordsmen and driders will appear. In the storage area to the southeast, carrion crawlers can be found. Each of these battles will occur no more than five times. 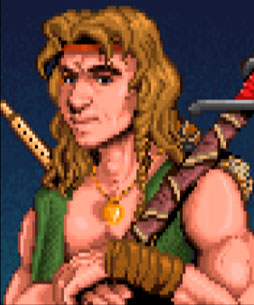 Objective: Defeat Lord Geildarr and his Zhentarim supporters that are attacking this Dwarven city. These are the remnants of the Zhentarim army from Gateway to the Savage Frontier. Lord Geildarr is located in the keep below the city east of Event 6.You can also complete the Falling In Love quest here. See the Main Story tile under the Falling in Love tab for more information.

Experience: This is a small map, but with lots of encounters and plenty of experience and treasure..

Leaving: After clearing out Llorkh and Lord Geildarr’s keep below the city, train your characters then head west to Loudwater.